In search of the range limit for DMR

So what is the maximum range that one can achieve with DMR? There has been much discussion about this on the on-line forums, since there is a physical limit as to how far two DMR stations can communicate with one another, given that DMR is based upon the Time Division Multiple Access (TDMA) channel access method. So on the Labour Day weekend, the author, Don Trynor, VA3XFT, made the trek from his home in Toronto, ON, to the 6,288′ summit of Mount Washington, NH – the highest point in New England and home of the highest wind speed record on earth.

For the background, DMR uses two 30 ms timeslots – one for Timeslot 1 talkgroups (Worldwide, North America, etc.) and the other for Timeslot 2 talkgroups (Local and regional traffic). While this architecture allows for two simultaneous conversations to take place on a single frequency, this is at the expense of having a useful range limitation. Since radio waves travel at the speed of light, which is 300,000 km/s (180,000 mi/s), it takes them a certain amount of time to travel a given distance. As an example, radio waves can travel around the circumference of the earth in a mere 21 ms, which is equivalent to the shutter speed of the typical camera. If we calculate the distance that radio waves can travel in the 30 ms duration for a DMR timeslot, the distance would be a whopping 8,994 km. So a little mountain topping with a DMR handie talkie shouldn’t be a problem, right? And so this is the scope of our test. 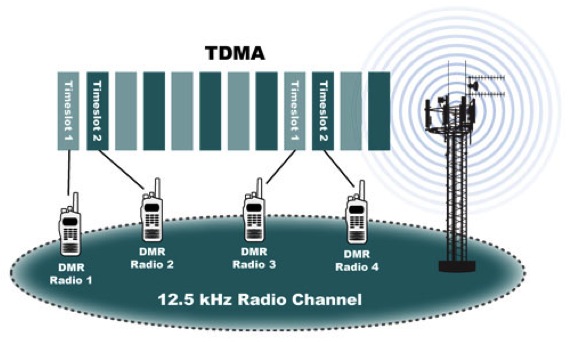 Getting to the summit of Mount Washington couldn’t have been easier, as the Mount Washington Auto Route, a 12 km road built in 1861, winds its way right to the top. From there, you are greeted by hordes of tourists and hikers, who have likewise made the dizzying ascent, be it by car, cog-wheeled train or up one of the many hiking trails to the top – all there to marvel at the breathtaking view offered by the Appalachian Mountains. Once there and after a little sightseeing, Don tuned into the K1MOT UHF DMR repeater on 447.725 MHz, which is located in Hudson, NH – 162 km (101 mi) to the south, to see if he could make any contacts using the Northern New England talkgroup (TG 3133) using his Motorola MOTOTRBO XPR 7550 handie talkie. His first contact was Bill, NE1B, the repeater trustee and during the QSO, the signal level on the XPR 7550 was at full scale. After a brief conversation, Don then switched to the North American talkgroup (TG 3) to see if any additional contacts could be made and this is when the limitations of the system started to become evident.

After calling a couple of times, Don was finally able to raise a station on the North America talkgroup, however these stations could not fully copy Don and likewise, he could not fully copy them, as there appeared to be significant packet loss between the two stations. The same thing occurred when Don tried to talk to another station using the North America talkgroup, however when Bill, NE1B, came onto the North America talkgroup, the conversation with him was smooth and uninterrupted by packet loss. Unlike the conversation with Bill, who was on the local DMR repeater being used during this test, the other stations were using other repeaters elsewhere in the US, which are all connected together via the DMR-MARC network using Motorola’s proprietary IP Site Connect (IPSC) protocol. This protocol allows multiple Motorola MOTOTRBO repeaters to be interconnected from geographically disparate locations using the Internet. From this test, it would appear that the 1 ms delay that the signal takes to travel 162 km (101 mi) from Mount Washington to Hudson, NH, was enough to disrupt the smooth flow of packets through the DMR-MARC IPSC network to distant DMR repeaters, thereby causing intermittent and unreliable communications, even though local repeater communications appeared to be unaffected.

While this test was far from a controlled test using the rigor of appropriate test equipment and exact measurements, it was sufficient to highlight some of the possible range limitations associated with DMR repeater networks. With mountain topping and DX-peditions using DMR are likely to become more common as the mode matures within the ham radio community, users may expect similar anomalies with DMR that they wouldn’t experience using other modes, such as FM, SSB or AM.